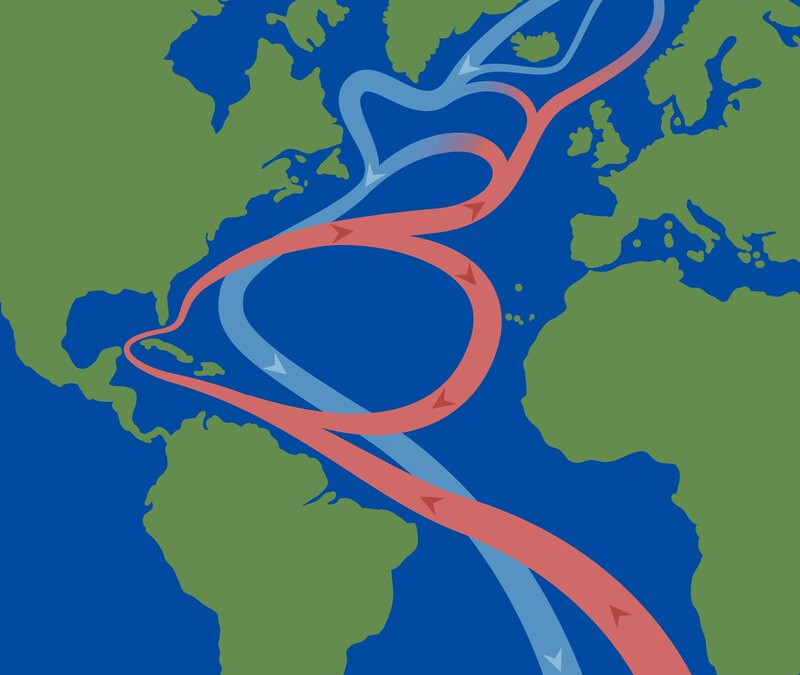 AMOC – Atlantic Meridional Overturning Circulation operates as a heat exchanger between warm equatorial and cold polar waters. The oceanic circulatory system is the driving force behind our planetary weather systems. New studies identified a significant slowdown in the rate of oceanic current circulation resulting from melting polar ice, which releases large volumes of freshwater. The influx of fresh water dilutes the highly saline water columns that drive the AMOC system.

As earth continues to warm, the release of additional freshwater will further impact AMOC. The change may be catastrophic leading to shifting weather patterns causing severe storms, flooding, droughts, property destruction and loss of life. In addition, agriculture, biodiversity, and economies across the world will also be affected.

AMOC slowdown is the direct result of global warming causing arctic glaciers to melt. According to research, this increasing temperature can potentially make the AMOC go dormant. Below are research models representing circulation change.

“It is worrying news because if this is true, it reduces our safe operating space.” says physicist Johannes Lohmann, from the University of Copenhagen in Denmark.

Lohmann and his colleague Peter Ditlevsen created an ocean climate change model forecasting the results additional freshwater released from the Greenland ice sheet will cause. The model displayed freshwater dilution canceling AMOC faster. The discharge rate is increasing, and once the tipping point is reached, it will never be the same.

Lohmann told Molly Taft at Gizmodo. “These tipping points have been shown previously in climate models, where meltwater is very slowly introduced into the ocean. In reality, increases in meltwater from Greenland are accelerating and cannot be considered slow.”

The Mechanics Behind AMOC

AMOC works in a giant loop transporter of seawater. Redistributing water and heat around the Northern Hemisphere as the water’s temperature, salinity, and relative density rises and falls. That is the reason why European winters are mild at high latitudes.

Climate change modeling is complex with many variables to consider. Lohmann and Ditlevsen admit there is much work to do to fully understand the rate inducted tipping point. Researchers claim “Due to the chaotic dynamics of complex systems there is no well-defined critical rate of parameter change, which severely limits the predictability of the qualitative long-term behavior. The results show that the safe operating space of elements of the Earth system with respect to future emissions might be smaller than previously thought.”

Factors affecting earth’s climate are complex and interconnected. Change is revealing itself in a variety of ways including increased frequency of hurricanes with greater storm severity, extended droughts resulting in catastrophic fires and shifts in winter polar vortex causing power outages, property damaged and hazardous roads.

Emergency preparedness is essential to weather the storm of climate change. HaveLight.com offers an extensive selection of flashlights and lanterns to keep one safe during hardship conditions. We also offer an impressive assortment of LED property lighting; which operation requires less energy resulting in lower greenhouse gas emissions.